Gamelan degung is unique to Sunda. It developed during the 19th century in the courts of the Bupati (Regents), who were the local Indonesian rulers under the Dutch. Since Independence in 1945 degung has become increasingly widespread among the general populace. Nowadays it is often played at wedding receptions, or as background music. Because of its former aristocratic connections, the middle class consider it more 'up-market' than gamelan saléndro. At the same time it has also become the vehicle for a certain type of Sundanese popular music , which via the cassette industry enjoyed phenomenal commercial success in the late 1980s (degung instrumental. While in the courts (Kabupatén) degung was played exclusively by men, now it is more often played by groups of women (apart from the suling and kendang). 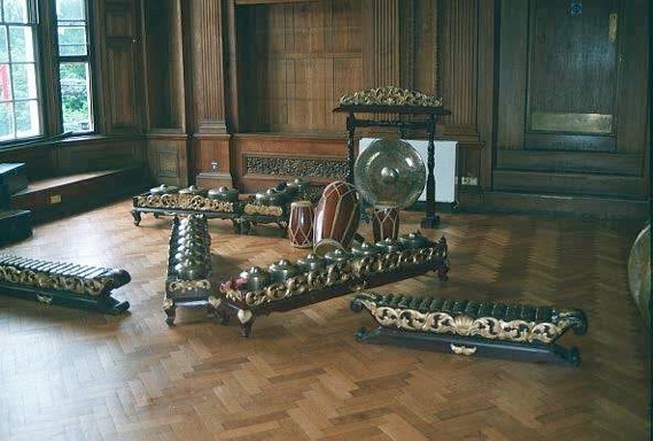 degung klasik configuration
Note the old-fashioned positioning of the kendang (drums).  In practice nobody normally plays kendang this way round nowadays.

The music usually played on gamelan degung has changed considerably since the time when it was played only in Court. Formerly the repertoire consisted primarily of long, rather austere pieces without singing. This style is sometimes referred to as degung klasik. During the 1960s the then very influential Radio Republik Indonesia (RRI) station in Bandung introduced female choral singing (rampak sekar) into pieces of this kind. Later, degung came to be used to provide accompaniments for a female solo singer, or juru kawih. This more recent style, known as degung kawih, is based on very simple, small-scale pieces. It is very undemanding for the instrumentalists (which partly explains its popularity among "ibu-ibu" groups, ie ladies' groups, who are often more interested in being seen looking decorative on stage, than in rehearsing complicated music). Since any such piece can function as the accompaniment for any number of vocal melodies, an amateur group with a repertoire of only four or five pieces would already have enough material to accompany a professional juru kawih and kendang player at a wedding reception lasting several hours. The large pieces, since they have become rather unfamiliar, have gained an undeserved reputation for being extremely difficult to play.

A gamelan degung comprises the following instruments:
In older degung the jengglong pots are hung from a frame, facing the player. In more recent instruments, the pots are often placed on horizontal frames (as in the photograph at the top of this page). One musician told me that this is considered more suitable for women players! 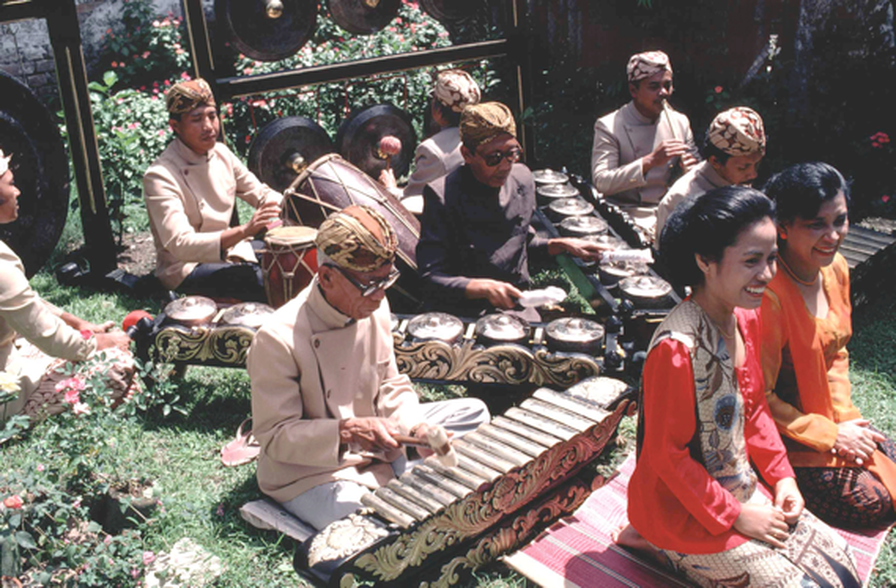 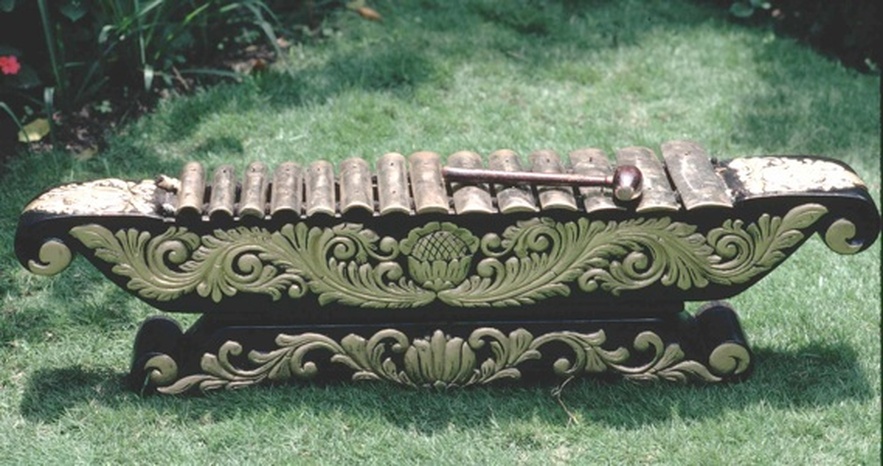 Peking
The decoration (also used for the banner of this website) was carved by Ade Komaran, who is playing kendang in the photograph further up this page. 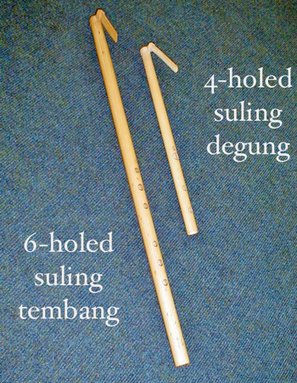 The cémprés and peking are similar instruments. They resemble saron (metallophones) in gamelan saléndro, but have a range of about two and a half octaves. The exact ranges of the two instruments vary in different gamelan degung, but they always overlap, with the peking (usually) higher pitched. They tend to be played in different octaves.

As in gamelan salendro, a set of kendang consists of one kendang ageung (large drum), and two kulanter (small drums). In degung klasik, the kendang is placed on its stand with the edge of the small head resting on the floor, and the large head facing the player. The two kulanter are then placed upright on either side of the large kendang. The right-hand kulanter has its large head facing upwards, and the left-hand one its small head facing upwards. In this style the large kendang and the right-hand kulanter are beaten with a stick, while the left-hand kulanter is slapped with the hand.  In degung kawih, the kendang are played as in gamelan saléndro. Since nowadays programmes that include pieces in degung klasik style usually also include degung kawih pieces, in practice the kendang are usually placed as for gamelan saléndro, and played with a stick in that position during degung klasik pieces.

The suling (bamboo flute) used in degung is quite short (a little over 30 cm long) and has four holes. Its effective range is two octaves.

The instruments mentioned so far constitute the classical line-up. Nowadays in degung kawih other instruments are often added. These may include a kempul (small hanging gong), gambang (xylophone), a pair of one-octave saron, and a kacapi siter (a small zither with 20 steel strings). Occasionally a rebab may replace the suling, particularly if playing pieces from the gamelan pélog repertoire. In degung kawih, the normal suling degung may be replaced by a longer 6-hole suling tembang which has a larger range.

NEXT: Tembang Sunda and Kacapi Suling