The most obvious difference between Sundanese and Javanese gamelan salendro is that in Sunda the soft instruments with tube resonators (slenthem and gender) are not used. Sundanese gamelan uses one large goong. Only one kempul (small hanging gong) is used. Few Sundanese gamelan include the horizontal gong chimes kenong and kethuk. Instead there is an instrument not found in Java, called jengglong. This consists of 6 flat pots (rather like the large Javanese gong-chimes, bonang panembung) on a horizontal frame like that of a kenong. In gamelan salendro, the pitch is generally the same as the lower octave of the bonang. 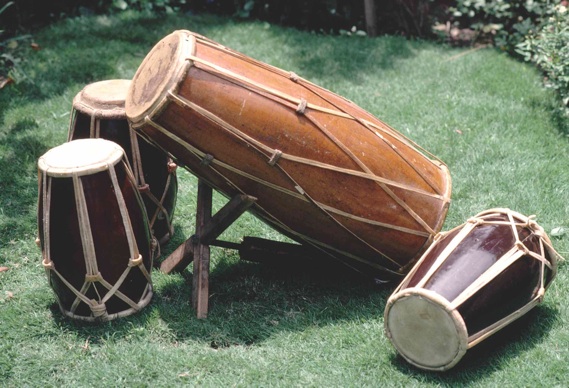 Gamelan pelog is the equivalent set of instruments in the seven-note pelog tuning. It is not to be confused with gamelan degung, which uses a different five-note pelog scale and different instruments. Gamelan pelog is fairly rare in Sunda. People prefer salendro. Gamelan pelog is used to accompany dance, and also for wayang cepak, a type of rod puppet theatre originating from Cirebon, in which the stories are of local origin (unlike the more common wayang golek purwa, in which the stories stem from the Indian epics): but wayang cepak has almost died out. Pa Otong Rasta, a dalang (puppeteer) for wayang cepak, retuned his gamelan pelog to salendro in the 1960s in order to find enough work.  [This is the gamelan being played in the OU wayang documentary.]

Since the war, the female solo singer, juru kawih (juru sekar or pasinden, has become increasingly prominent in gamelan. Forty or fifty years ago wayang, for instance, was often performed without a singer. That would now be unthinkable. The focus of musical interest has changed as a result. The gamelan now functions much more as an accompaniment for the vocal part, and some of the more interesting instrumental techniques are rarely used, since they would distract interest away from the vocalist.

Besides the juru kawih, there is a male vocalist, juru alok. His role is to sing during the interludes between verses. The juru alok also leads the other male musicians in the senggak. These are rhythmic cries, hoots, animal noises, shouts of encouragement, heckling and so on. They can get pretty rowdy, especially in wayang.

The increased importance of the juru kawih is undoubtedly partly the result of the advent of the microphone and sound system. Amplification (and distortion) are now ubiquitous. The popularity of jaipongan has led many younger drummers to play relentlessly in red-hot jaipongan style regardless of the musical context. This is very exciting in reasonable doses, but it is frequently overdone and inappropriate, as older musicians often complain. Despite already being very loud, at live performances the kendang are also usually miked up. It is quite often difficult to hear anything other than the singer and drummer: the gamelan is relegated to a background ripple.